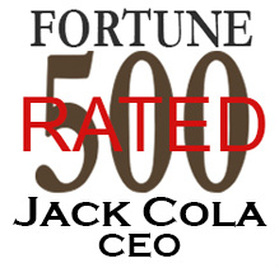 Jack Cola (born John Colaiacovo) is a three-time Fortune Rated CEO, based on his work with three companies. Cola’s first fortune rating came from taking a tri-state incorporation company, which is a company that allows incorporation for businesses and the creation of patents. Cola made this company a multinational corporation in several places, including the Cayman Islands, Nevis, Canada and Mexico. At the company, Cola not only made corporations, forged patents and copyrights, but they offered PBX systems, and Voice Over Internet Provider. The company also did counterintelligence for businesses to avoid espionage, and had a full consulting division for commercial and residential construction. What started out as a small incorporation company was quite large by the time Cola left.

Cola’s second fortune rating came from working at Accolade Global, a capital investment firm, where he was chairman and CEO. When he began at the company, it was offline and profiting at $3 million in revenue a year. With Cola as chairman and CEO, the company sold off a lot of commercial investment properties and instead bought intellectual properties, such as domains. The company developed websites and went online. When Cola left, about 4 years later, the company was making a profit of $17 million a year.

The third time Cola became a fortune rated CEO was for his work at the Lucentra Corporation. Lucentra is an international consulting firm specializing in expanding international business. It was a somewhat small company before Cola was hired as CEO. Lucentra was left without a CEO in the beginning days of the first quarter. Cola was hired approximately 15 days into the quarter and he came in with a vision. This vision led to an increase in Lucentra’s online presence and business knowledge expertise. Twenty-two days after being hired, he gained Lucentra a 193 percent profit. This was due to the world stock exchange and was, and still is, the largest profit ever recorded in a first quarter. Cola has had a great amount of success in business and is revered for the work he has done.
Home
Subscribe to: Posts (Atom)